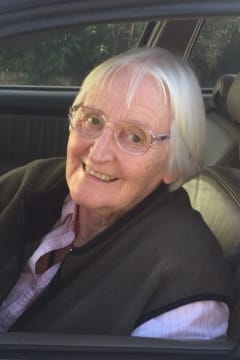 Arlea Jean Lippincott Stern was born in Boulder, Colorado with a warm strong beating heart on a wintery day, just after Christmas, January 5, 1928.

Found in her treasures was a small birth announcement kept by her maternal Uncle, who must have treasured news of his dear niece’s arrival. Her parents Paul and Martha Lippincott had waited to start a family. They were working as nurses in California, saving money to move back to Boulder Colorado and purchase a farm near the homestead on which Paul had been raised. They both had deep roots in the eastern slopes and plains of Colorado. These roots would shape the person Arlea would become.

By Arlea’s first the Great Depression was looming. The stories of this time of struggle never included hunger or cold. She had parents who had grown up working bare land and made sure they were safe, with father a farmer and mother a nurse and homesteading families nearby. The small two room school was walking distance from her farm and provided room for growth.

Our mother had the most wonderful imagination and gift of play. She and her younger brother Leo could recount even in the last year of Arlea’s life the great advantages of living on a farm. Raising bum lambs, sliding down the barn roof just to make the bull mad, learning how to do dishes without clobbering each other these are some of the most treasured stories we children love to hear reminisced.

A favorite memory was riding an old bicycle up Left Hand Canyon as high as stamina would take. Arlea and her young grade school friends would stop at the top, eat their lunches, then put their feet on the handlebars and careen down the road following the river below. NEVER would they be so crazy as to put their hands on the handlebars – what would be the point?

Arlea went to Loveland Colorado’s Campion Academy where both she and her father had also attended. She made many lifelong friends at this time. She gained confidence and still had time for many playful adventures. Sliding down banisters, sneaking to visit friend’s rooms during study hall, skiing, reading books all night long. Little Women, a favorite, she read over and over during her lifetime.

In 1946 WWII had just ended and Arlea headed off to become a Nurse at Union College in Lincoln Nebraska. Many of the girls in the college dorm at that time were diligently working on their Wedding Hope Chests – embroidering dishtowels and pillow cases. Arlea never had the time for such tedious work as there was so much more to see and do than sit around with needle and thread.

In the College dining hall Arlea’s smile and Auburn hair (not RED Arlea would often defend) was noticed by a returned Navy Veteran Algene Dahl Stern. They quickly became an item and by Spring when Al asked Arlea to marry him, she cried out, “I am sorry I can’t!” Al asked, “Why not?” “I have no HOPE Chest!” Al laughed and said, “I will buy you all the Dish Towels you need.” They were married at her farm in a garden wedding, July 14, 1947. In the more than 66 years they were married Arlea never remembers Al ever needing to buy her dish towels as the kitchen drawer was always full.

Pamela Lee Stern joined the family in May of 1948. Born in Jamestown North Dakota. Al continued to work at finishing his Religion degree at Union College. At that time Married women were not allowed in Nursing school. Life with a baby while living in a small trailer in the Student Trailer Court housing at the beginning of the baby boom required organization. Families had to sign up on a 24 hour schedule for time to use the old style washers with ringers. Imagine at the beginning of the baby boom all the diapers!

Al graduated with a degree in Religion in 1952 and they began 35 years of Ministry for the Seventh Day Adventist Church in Western Nebraska. Jackie Douglas Stern was born in November 1952 in the same hospital where Arlea had been born in Boulder Colorado.

After 3 years of digging out of deep Nebraska snow drifts it was determined that God needed ministry in California too. They were given a call to work for the Seventh Day Adventist Church in Lancaster in 1955. While living in California a new nursing program was introduced that offered a degree in one year as a Licensed Practical Nurse. With two children in grade school Arlea went back to school as well. She became an LPN and would practice Nursing until she was in her 70’s.

Christmas of 1961 Arlea told Al she was going to quit work and take some time off for the holidays. She had worked with cancer patients that year and had symptoms that made her concerned about her health which she kept to herself. She wanted to have one last happy Christmas with her family. To Great Surprise the tumor end up to be Janna Marie Stern who joined the family in July 1962.

Arlea and Al lived in 33 different homes within 5 States during their lives together. Al’s mother would say, “Arlea moves into a new home and plants a garden as if it will be her last home.” This is the way she lived her life, always eager to have an inviting home, she was generous with her time and care for others. They were always making new friends but stayed connected with “old” friends as well as family. They made time to visit all over the country traveling by RV always on an adventure.

Arlea’s brother Leo & his wife Shirley had established roots in Estacada Oregon. In 1987 when Al Retired after 35 years working for the SDA church they decided to move to Estacada where her parents had move nearly 10 years earlier. The couple became an active part of the Estacada community for 28 years.

Arlea became co-director at the Estacada Adventist Community Center’s thrift store where she cherished hours spent with her friends who volunteered sorting donations. The residents of Estacada treasured this helping ministry fondly called “The Yellow House.”

Arlea kept a beautiful yard, and a large vegetable garden with berries, however Al often reported how much joy he observed in Arlea doing hours of Tole Painting. Many of her treasured works were given as gifts. It’s said about Tole painters, “She who dies with the most wood wins.” Arlea was a Talented Winner!

There was a shock in the spring of 2009. A neighbor of the “Yellow House” came to Arlea with a little expensive Yorkie puppy and said with finger pointed, “God TOLD me to give you this dog.” Sweetie Pie joined the family and was the greatest joy to both Al and Arlea. When Al passed in 2015, Sweetie Pie continued to be Arlea’s constant companion. In 2016 when Arlea moved to Sequim to be near Pam, Sweetie Pie kept Arlea’s memory on a schedule in their cozy apartment.

The cruel thief dementia tried to steal our mother. Pam and Larry Arnott just 15 minutes away, prioritized making Arlea’s life comfortable. As more care & help was required, Jack made several visits from North Carolina and stayed with her to help tend to her needs. Janna organized around work in Seattle and travel by ferry to look after Arlea in her home filled with art, books and treasures of a long life. Arlea always expressed how much she appreciated having her children come and help.

Leo and Shirley, and the Lippincott Cousins, would travel to Sequim and generously find time to visit this brought much joy to Arlea. Her three grandsons William, Paul and Joey along with their families were all able to visit Arlea in the last few years. They were told again the stories of childhood on the Colorado farm that seem to roll off her tongue even as she would forget her current surroundings.

Riding through the pastural Sequim backroads, Arlea’s adventurous spirit shone while playing the competitive Horse and Cow Counting Game. “WHITE HORSE for 100 points!” she’d enthusiastically shout. To which her great granddaughter Jazzy Arnott laughingly exclaimed; “Great Grandma, you are so much fun!”

She left us surprisingly fast and peacefully on the evening of February 16 at the age of 92. We are grateful she did not suffer long and given how the Pandemic shut things down only one month later she avoided the isolation many have experienced in a way she would not have understood.

In our family we have Hope. We know, “There is a River that Flows from The Throne of God.” Someday we will all be privileged to meet again at that River.