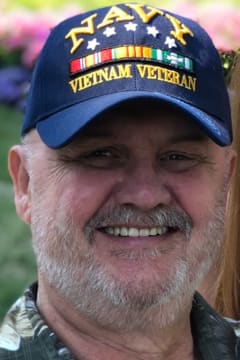 Arthur W. "Bear" Byerly was born on September 4, 1948, in Modesto, CA, the son of Arthur and Frances Byerly. After high school, he enlisted in the U.S. Navy and served during the Vietnam War with the River Patrol. After his honorable discharge in 1968, he returned to California, where he briefly attended Modesto Community College and worked in construction and hotel management. In 1992, he met Katie, the love of his life, and the two were married on January 23, 1993, in Fresno, California. In 1996, they moved to the Portland area, where he worked for a non-profit housing organization for five years before returning to college. In 2001, he obtained an associate degree in the medical assistant and phlebotomy program at Clackamas Community College. He then worked at Oregon Health and Sciences University (OHSU) as a lab tech until retiring in 2013.
Art was passionate about speaking with youth regarding drug and alcohol abuse during his free time and sharing his testimony. He celebrated 33 years of sobriety. He also enjoyed riding motorcycles, and throughout his lifetime, he was an active member of several motorcycle clubs. Some of the clubs he belonged to include The Fifth Chapter Motorcycle Club and the Association of Recovering Motorcyclist (ARM) Club in Fresno, CA. He was also a member of the Veterans Motorcycle Club in Portland, OR. He served as the club treasurer for several years. In addition to riding motorcycles, he loved spending time with his family, friends, and his beloved dog Bailey.
He was preceded in death by his parents and sister, Carole Harriston. He is survived by his beloved wife, Katie, daughter, Courtney, and son-in-law Adam Madison. His sisters-in-law, Anne Rehart and Melissa Morison. His brother-in-law, William Morison. His nieces Michelle Salinas, KiRe Klettke, Meri Klettke, and Alexia Jardine. His nix Berlin Klettke. His great-nieces Elizabeth Salinas, AJ Weisser, and Paprika Klettke. His nephew James Weisser, Steve Weisser, and David Weisser.

He was deeply loved by everyone who was blessed to know him, and he will be deeply missed.

A celebration of life with military honors will be held on Wednesday, April 13, at 2:30 pm at Willamette National Cemetery in Portland, OR.

In lieu of flowers, memorial contributions can be made to St. Jude, Shriners Children's Hospitals, or Wounded Warriors.