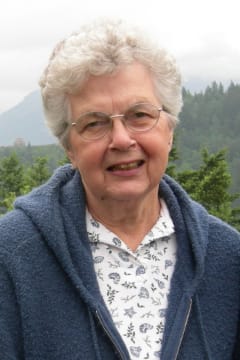 A graveside service will be held 2:00 PM, November 3, 2021 at Willamette National Cemetery.
Bernice Josephine Schnuit was born September 14, 1930 in Bethlehem, Pennsylvania. At age 14, her family moved to the Bremerton, Washington area. Bonnie graduated from Kitsap High School and from Multnomah Bible College where she met her future husband, Zeno Winton Weiss. They married on July 12, 1951 at Sammamish Bible Camp in Washington. Bonnie spent the early years of their marriage as a student’s wife while Winton attended Seattle Pacific College and a pastor’s wife in Granite Falls, WA and Gold Beach, OR. In 1957 they moved to Portland, OR. Bonnie became his true and lasting helpmate in his new career of teaching elementary school in the Parkrose School District. Bonnie often substituted in the administration offices at the schools and was a long-time election worker in her home district.

She was a faithful servant and worked tirelessly to host and support missionaries from their Bible College. Bonnie was an exceptional homemaker. She enjoyed gardening, especially her roses. She was a prize-winning violet grower and won many competitions.
She devoted her life to her Sunday School, neighborhood Bible club and Winton’s school students. She often made special cookies, cards and other treats to show her love for the children. Service to others, joy of giving and sharing the love of her Savior and Lord was a lifelong pursuit.