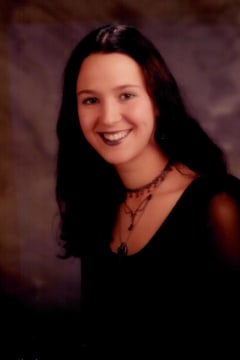 What do you say about a spunky little kid who quietly shadows her big sister on an Easter egg hunt…and carefully, stealthily sneaks each egg out of her sister’s basket? And laughs when her sister cries, “Mom, I have a hole in my basket!”

That cute little kid was Carrie Kay Prokop. She burst forth into this world In Oregon City on June 15, 1980 (Father’s Day), joining her two year old sister Charlotte, and landing in the proud arms of her parents Charline and Carl Prokop. She truly (literally) was her dad’s “Father’s Day present”.

From early on Carrie had a twinkle in her eye, a passionate heart and a courageous and creative mind. She was slow to grow hair as a toddler and was proud when her hair finally grew in. When her uncle teased her that she needed a haircut, she retorted “Uncle Gib…it took me long enough to grow it. You are not going to cut it.” Then one day Carrie was discovered in her room with her blonde locks clumsily shorn, and scissors in her lap. She was quick to explain, “I didn’t do anything, they are magic scissors…they cut my hair”. Those pesky scissors cut her dress, too.

Her childhood was filled with fun, games, My Little Pony, Super Mario Bros, endless hours in the backyard pool, jigsaw puzzles and parties with friends. She liked to dress up (Strawberry Shortcake and Smurf), and Halloween was a favorite holiday. Carrie loved riding horses with her older sister and thrived at summer camp at Camp Namanu. She dearly loved her black cat “Magic”. Passionately ethical, she learned about animals as a food source and became a lifelong vegetarian at age 10.

Carrie thrived in school and was an honor student from elementary through high school. In high school she ran track, played volleyball, played clarinet in the band, loved chess, choir, and found her “people” in drama. She was involved in many theatrical productions and her love of theater carried on her entire life. She was reliable and industrious and began her working career as a teen, renting videos at Prokop’s TV Sales & Service, waiting tables at Harmony Baking Co., and selling retail at TJ Max.

Life changing tragedy struck in 1996 when her beloved sister Charlotte was killed in a car accident. She carried the intense loss her entire life. Her internal strength and drive, her family’s love, her lifelong friends supported her. Carrie continued on, traveling abroad with school programs to Greece and England, creating many fun memories. (Ask Jamie about how they once caused an electrical “black-out” in a New York hotel.)

Carrie developed a love and true skill with photography. Her artful photos highlighted her creativity and she won acclaim and awards including 1st place in VICA’s Oregon State “Skills USA”. She graduated Estacada High School with honors, stood out among her peers as Valedictorian, and was an honored speaker at her graduation.

Her love of photography sent her North to the Art Institute of Seattle. After several years of study her passion for photography became overshadowed by theater. She had season tickets to traveling Broadway shows and she saw every one she could. Hamilton was her favorite. She loved living in Seattle, worked at several nice pubs where her dramatic, creative flair was allowed to flourish. Her childhood love of Halloween turned into grown up wit as she donned elaborate costumes for days leading up to October 31st. She sent photos home of a widely smiling Carrie who had “become” Snow White, a princess, the devil, an Irish babe, and Edward Scissorhands.

She shared her love of Seattle with her family, leading her visiting mom and friends on urban treks, sampling drinks in bars, competing in shuffleboard, even joining a “Sleepless in Seattle” sailboat tour.

Serious medical problems made the last years tough for Carrie. She struggled with Crohn’s disease and was more restricted on diet and dependent on routine medical treatments. Even so she continued to live independently, and work as she could delivering food. She rekindled the love that brought her to Seattle, taking photographs for a friend working with a local non-profit agency.

Carrie died April 21, 2022. She was preceded in death by her beloved sister, Charlotte. She leaves behind her loving parents, Carl and Charline, a large extended family and a huge community of folks, young and old, in Oregon, Washington and beyond.

What do you say about this smart, passionate,
creative, beautiful, ethical human?

With grief we imagine the photos uncaptured.

In lieu of flowers please consider a donation in carrie’s name to the crohn’s & Colitis foundation
https://p2p.onecause.com/nationaldiy/memorial/in-loving-memory-of-carrie-kay-prokop