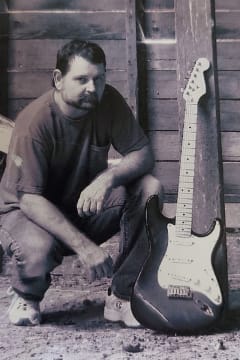 Darryl James McDonald, born on December 6, 1963 in Toronto, Ontario, Canada passed away from a heart attack on April 20, 2022 in Portland, Oregon. Darryl grew up in Southern Ontario where he enjoyed spending time with his grandparents, Gladys and Alfred Brydges (Mimi and Pipi), hanging with his three sisters, and regularly taking to the ice to wow his parents with his skating and hockey skills. During his late teens he moved with his family to Southern California, where he attended Alta Loma High School – excelling in drafting, painting, and music. His musical talent was so strong that he even played in the highly competitive Los Angeles music scene. In early adulthood, he made a big move to Oregon, ultimately settling in Oregon City which became a home he truly loved. The calm and peaceful atmosphere created by Oregon’s rolling hills and never-ending trees provided him with a space to engross himself in his true passion - music, connect with others, and grow. His calm, kind, and gentle spirit were a perfect complement to the scenery.

He is survived by his parents, Carol L. Todorov (mother) and Walter L. Todorov (father); his three sisters and their beautiful families, - Shannon Powell (Michael Powell, Ashley Burnard, Leah Powell), Allison McDonald (Ron Robertson, Jordan Anderson), and Leslie Fierro (Robert Fierro, Simon Fierro); his partner/girlfriend Vina Hoskins; his lifelong friend, Rod Bennett; and his trusty cat, Buddy. Words cannot begin to express how much we, and the broader community within which he lived, will miss him.

Friends and members of the broader community are invited to join Darryl’s family in celebrating him and saying a final goodbye at Estacada Funeral Chapel (110 West 1st Ave., Estacada, Oregon, 97023) on Monday, May 2, 2022. Viewing will begin at 11AM, followed by a celebration of his life at 1PM, and a committal service at Logan Pleasant View Cemetery at 2PM. In lieu of flowers please consider donating in memory of Darryl to the Canadian Music Therapy Fund (https://musictherapyfund.ca). If you would like to send an e-card as part of this donation you may address it to his mother, Carol Todorov at DarrylMemory@gmail.com.