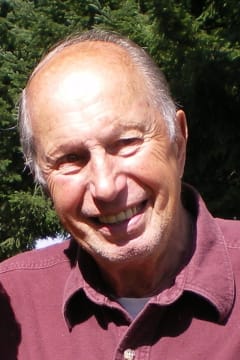 Always Loved! Always in our hearts!

Jim Galluzzo, a long-time resident of Estacada was born in Portland Oregon to the parents of Andrew and Rose (Navarra) Galluzzo. He was raised within a large Italian family and community. He attended Catholic elementary school and graduated from Central Catholic High School in 1947. He furthered his education for three years at the University of Portland.
Prior to finding his career, Jim was a dance instructor at Arthur Murray Dance Studio and he also drove a produce delivery truck. His life’s work was found when he was educated in the art of meat cutting in the Portland area. In the mid 1950’s Jim found a full-time job in Estacada Oregon, cutting meat for Paul and Sally Treckemee at their grocery store.
In the early 1960s Jim bought the little grocery store and meat market and became the owner/operator of The Estacada Food Center and his legacy began. Shortly there-after he bought and settled in his long-time home on Day Hill Road where many memories with family and friends were made.
On August 1st, 1969 Jim took the love of his life, Lois J (Dusek), Haughton to be his wife along with her children Cindy, Nancy and John Haughton and then their daughter Lisa was born in 1970.
Jim and Lois employed many wonderful long-time employees that became part of our Food Center Family including many local school students grew up working in the store and learned work ethic and many life lessons. Jim and Lois also employed their four children. Cindy and Nancy Haughton worked there for several years as cashiers. John learned to cut meat from Jim and has been a butcher and meat manager for 42 years. Lisa started bagging groceries, stocking shelves and running errands at age eleven and worked through-out the store as she grew up.
When Jim wasn’t working hard at the store you could find him on the golf course, dancing or watching a good Western. He also enjoyed playing poker, pinochle and he was always up to win a good game of pool. Later in life he really took a liking to the dice game ten thousand.
Jim and Lois loved giving their customers and friends a personal kind of customer service in their store. The kind of service that says we care, we value you, we share our love of life and family with you all and they did that beautifully for over 40 years until they retired in 1996. Jim spent several years of retirement close to home, loving his family and friends, enjoying his hobbies and making treasured memories.
This courageous and strong man passed on June 26th 2021 at his home surrounded by close family. Jim was preceded in death by his parents Andrew and Rose Galluzzo; Brother, Salvatore Galluzzo; Sister, Prudence (Galluzzo) McDonald; Brother-in-law, Howie McDonald; Uncle Gus Rinella. Survivors; Jim’s beloved wife, Lois J (Dusek) Galluzzo; Daughter, Cindy (Haughton) Mills; son-in-law, Don Mills; Daughter, Nancy (Haughton) Henley; son-in-law, Gary Henley; Son, John Haughton; Daughter, Lisa (Galluzzo) Lessard; Son-in-law, Matthew Lessard; Grandchildren; Angela (Rehberg) Delgado, Stephanie (Rehberg) Welsh, Lori Linville, Kelli Linville, Jared Haughton, Trenton Haughton, James Deckert, 14 dear great grandchildren, many nieces, nephews and sister-in-law Jean (Bertoli) Galluzzo.

Celebration of life will be held on July 31, 2021 at Springwater Golf Course 25230 S. Wallens Rd. Estacada, Or 97023.
12pm – Commemorative 9 holes of golf in honor of Jim and his love for golf. Please call or text 503-312-1907 to reserve your spot and for any other information.
3pm – Ceremony on 9th hole, officiated by Pastor Brent Dodrill
4pm – Food, refreshments and The Bobby and Friends Band.
The family invites you to join them in celebrating Jim’s life in good ol’ Galluzzo fashion!
*Special thanks to Rob Gaskill at Estacada Funeral Chapel for all of his help with making arrangements and his loving support to the family.

Sending love and condolences to Jim's family. He was a vital part of the Estacada Community. May he rest in peace.
- Leo and Shirley Lippincott

Remember him mostly from the grocery/meat dept. Also had a hello! May he rest in peace.
- Deanna Courtain