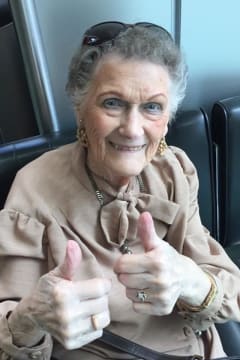 Jeanne Lorraine Flohr passed away on December 8th, 2021, at Cascadia Village Retirement Center in Sandy, Oregon at age 103. She was born on the 9th of June 1918 in Pierce County, Washington to Don and Maude (Good) Rager. Jeanne grew up on her parent's 10-acre farm near Sumner, Washington and went on to graduate from Sumner High School in 1936. After high school until 1941 she worked various jobs in the Sumner area. It was during this period of her life that she developed her love of travel, and upon her passing she had traveled to 46 of the 50 states and had a story to tell about each state she had traveled in.

On February 25, 1942, she married James Flohr whom she was introduced to by her Uncle Frank. They would share many adventures together over the next 54 years. Shortly after their wedding they decided to locate in northern Indiana to take up the life of dairy farmers. During this time, they were blessed with the birth of 2 sons; Kerry (1946) and Kim (1949).

In 1962, they decided to sell their farm and move to Clovis, California. It was during this time in Clovis, that they became involved in hospital, jail, and rescue mission ministry. In 1967 the family relocated to Los Angeles, CA to minister full time at Union Rescue Mission. After ministering in LA for 5 years, Jeanne and James were invited to become the leaders of the San Diego Rescue Mission and for the next 22 years, they worked tirelessly to serve the homeless, the addicted, and those in need in the San Diego area.

In 1994, upon retirement, Jeanne and James moved to Boring, Oregon to be near their oldest son and his family. During this time, Jeanne was an active member of the Eagle Creek Foursquare Church.

In 2017, Jeanne made her final move to Cascadia Retirement community in Sandy. It was here that she met many new friends and a kind and caring staff who took care of her so well.

She had a lifelong passion for music, and passed that passion on to her family. Regardless of where she lived, her home was always filled with joyful tunes.

The family would also like to thank Mt. Hood Hospice for their kind and gracious care to their mom over her final weeks of life.

A Celebration of Life will be held in the Spring of 2022.