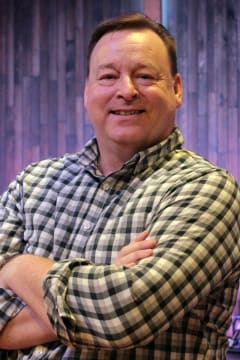 Larry Gene Pursel went to be with Jesus on March 14, 2021.
Larry was a gentle giant who was known for his love of people and Jesus.
Larry was born on August 13, 1962 in Medford, Oregon, the third child and son to Don and Charlotte Pursel. Larry loved to eat from an early age. The doctor put him on cereal before he ever left the hospital! Life was never dull with three boys in the family.
Larry’s family moved from Coos Bay to Dallas in 1975, where his Dad became the police chief. Larry always said he couldn’t get away with anything because his Dad would know before he got home!
Larry attended LaCreole Junior High and Dallas High school. He loved sports, participating in football, basketball and track. He also participated in choir, Dragonaires (swing choir) and theatre. Larry would often comment that his favorite part about choir was joining his fellow bass singers in singing high and off key and watching the soprano section have to practice extra because of it. It was there that Larry met Terrie Kellum. They later married on July 7, 1984. Larry went on to attend Linfield College for one year. He attended University of Wisconsin-Superior, playing football for them for two years. Larry also attended Western Oregon State College for a short time. Larry finally decided what he wanted to do when he grew up and went to Salem Bible College graduating with his Associates degree, later earning a bachelor’s degree, two Master’s degrees including a Master of Divinity.
Larry was a football coach at Dallas High for several years. He started out with the JV team, and eventually became the offensive coordinator under Grant Boustead. He went on to coach at Estacada High, coached youth football, and returned to Dallas to coach at the middle school level. He also coached basketball at Dallas High and later youth basketball. In the last five years Larry was a football official with the Salem Football Officials Association. He loved the friendships he made and being on the field under the lights on Friday nights. In 2019 it was his great joy to officiate youth games with his son, Connor, who also became an official. The time spent with his son on the football field was treasured moments.
Larry also loved music and playing bass. He and Terrie were in a band called Lifeline starting in 1983. He would joke that you could find copies of their cassettes at garage sales everywhere in Dallas. Larry later was a member of the band, Never the Less. Larry continued to play bass throughout his life in worship bands in church and at youth events. His greatest joy in playing came in the last few months when son Trevor became the worship leader for New Life, where Larry was pastor. Every week he would say how blessed he was to be able to make music to the Lord with his son.
Larry and Terrie spent several years running a behavioral modification home for troubled teen boys transitioning from incarceration. In total, they had 54 young men in their home over a three year period.
Larry’s greatest pride and joy in life were his two sons, Trevor and Connor. The boys came later in life and Larry always considered them miracles and gifts from heaven. He shared his love for music, sports, fishing and trucks with them. He considered it a great privilege to be their Dad. In 2018 Trevor married Emily and Larry was so happy to have a daughter. At Christmas Larry received the news that he would be a grandfather in July. He was thrilled to know he was having a grandson to carry on the family name.
In his spare time Larry like watching cooking shows, grilling, watching Hallmark movies (he always knew they would have a happy ending) and his dog, Bubba. He also enjoyed fishing and vacationing with his family.
Larry loved Jesus with all of his being. His desire was to live his life in a way that God could bless. Larry started his ministry career in Nampa, Idaho in 1997 as a youth pastor. He ministered in several churches including Estacada, Eugene, Sheridan, and currently pastoring at Sherwood New Life in Sherwood, Oregon. He served as an adjunct professor at Northwest University Salem campus where he taught ministry classes preparing students to become pastors. He went on several missions trips including Bolivia, Sri Lanka, the Cayman Islands, and Haiti. Larry touched hundreds of lives with his love for them and his love for Jesus. He knew the message of Christ’s love could be delivered at any time and through any activity. He accepted people where there were and without judgment. He reached people through the pulpit, working in a guard shack where he ministered to truck drivers from all over the nation, playing sports, fishing, and many other activities. He wanted to be remembered for loving Jesus and giving people the opportunity for eternal life with Jesus.
Larry is survived by his wife, Terrie, children Trevor (Emily) and Connor and coming soon, grandson, Rhett (who he already nicknamed Sport!). He is also survived by two nieces, Andrea Jarman and Sara Pursel, and a tribe on Terrie’s side of the family. He is preceded in death by his father, Don, mother, Charlotte, brothers, Don, Jr. and Russ (Nancy), and nephew Eric.

I went with Larry to Grand Cayman in 2000. I remember one particular afternoon when he convinced 2 girls from another team that the normal ebb and flow of the waves was actually water being sucked out to sea to form a tsunami. I could hardly keep it together, their eyes were huge! One girl finally uttered, "I'm scared," and we all lost it. I remember that he loved to pull pranks and loved to laugh.
- Tyler