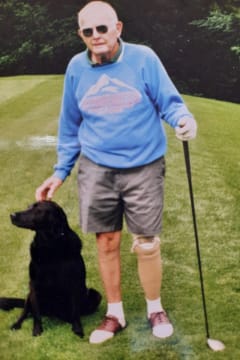 Robert was born July 31, 1927, in Portland, Oregon to Jack and Frieda (Rittmann) Saunders of Eagle Creek, Oregon. He grew up on the farm in Eagle Creek. Robert graduated from Estacada High School in 1945.

After high school Robert served his country, first in the U.S. Merchant Marines and later in the U.S. Army. He married June Johnsen on August 23, 1950, in Estacada. They continued to live in Estacada and raised their family there. Robert worked for PGE in Gresham until retirement, first as a lineman and later as a dispatcher.

Robert was an avid golfer. He was introduced to the sport by his son Bob, taking pride in his hole in one on the 4thhole of the Springwater Golf Course. He enjoyed golfing with his friends into his eighties. Robert loved to be busy, especially outdoors. He took pride in his yard, and spent many hours tending it. Some of his favorites included watching football or rodeo and listening to Merle Haggard.

Robert is survived by his daughter Gail Saunders-Martin and her husband Noel, as well as his beloved grandchildren Kelli Martin, Amanda Martin, Adam Widmer, and Elizabeth Widmer, and five great-grandchildren. He was preceded in death by his wife June and their children Bob and Diane.

He will be remembered as a generous, fun-loving man with a big heart. All his life he was a shining example of perseverance when faced with life’s challenges.