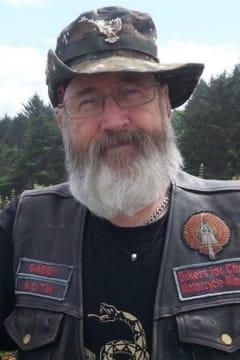 Longtime Estacada resident, Gabby Hayes, died at his home with his family by his side on Saturday, October 2, 2021. He was 74. A celebration of his life will be held at Barton Baptist Church on November 6 at 1:00 pm.
Terry Crandall Hayes was born March 6, 1947 in Napa, California to Edgar and Barbara (Hobson) Hayes. He was raised in the Fresno area and graduated from Morro Bay High School in 1967. Following his father to Oregon, he worked for the Forest Service in the mid 1970’s and in 1979 he started his long career with Eagle Foundry working his way up to pattern maker until he retired in 2014. His life took him on many adventures with the greatest on June 2, 1979 when he married Patty Bennett in Estacada. They traveled the country making it as far east as Tennessee. After they returned, they were ready for another adventure. Their son Tim was born in 1989. The next few decades were filled with trips to the mountains and the coast, family gatherings and the love of family.
Gabby enjoyed history, motorcycles, and had a deep relationship with Jesus Christ. Jesus was the number one person and topic in Gabby’s life. He would drop everything, at any time, to share a message and God’s love with whomever. Gabby gave his life fully to Jesus in 1976 at Ripplebrook up the Clackamas river with a good friend and coworker Kim Knutson. Gabby then began fellowship at New Life Center in Estacada. There he served as youth Sunday school teacher, Deacon, usher and the Praiser’s dance and worship team.
Gabby ministered on the streets, in the highways and byways, and was known as a “Street Preacher”. He served in many places as a guest speaker, teacher and preacher in Churches, homes, retreats, outreaches and motorcycle rallies. Gabby was also very passionate in his service for the Lord with Bikers for Christ and their many outreaches sharing the Gospel. He served as a “Watchmen” in the house of God and is now serving the King in paradise.
Survivors include his wife Patty; son, Tim; sister, Lynda; several nieces and nephews and many, many friends.