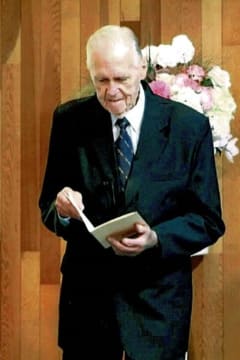 Gold Beach resident and leader, TV Skinner, passed from this life peacefully listening to scripture being read, holding his wife’s hand, and surrounded by family at his daughter’s home in Estacada, Oregon. He was 88 years old.
A memorial service will be held at 1:30 p.m., Saturday, September 11, 2021 at the Curry County Fair Grounds in the outdoor pavilion area.
TV Skinner was born to James and Helen Skinner on November 30, 1932 in Dalhart, Texas. He was the second of four children, Linda, Darrell, and Don. In the midst of the dust bowl, the Skinners moved to Colorado and then to southern California where both of his parents worked in the shipyards during World War II. When the war ended, the family purchased land and developed a farm near Vale, Oregon, where TV graduated from Vale Union High School at age 15. Following high school, TV attended Abilene Christian College, where he graduated cum laude with a Bachelor's of Science degree in animal husbandry. He then continued his education at Harding Christian College, working toward a Master's degree in biblical studies, and reconnecting with fellow Harding student Marilyn Eggers, who he had originally met as a child in Cortez, Colorado.
On September 6, 1953 TV married Marilyn in Cortez, Colorado. They relocated to Vale, Oregon, where they owned and operated a dairy farm and other farming enterprises in partnership with his parents and brother. Their four children, Terry, Randy, Tammy, and Liana were born during this time. TV was a “farmer / minister”. He regularly traveled and preached at several rural Church of Christ congregations in eastern Oregon and neighboring Idaho.
In 1969 the Skinners sold the farming enterprise and moved to Gold Beach, Oregon where TV served as the minister for the Gold Beach Church of Christ. In addition to his work with the Church he also worked at Evans Forest Products and Brookings Plywood. He became a partner in the Sanitation business in Curry County and was also elected to serve two terms as Curry County Commissioner.
TV also was an active community leader and volunteer, serving on the Gold Beach school board, Knox Town sewer district board, the Wedderburn fire district board, South Coast Business Association, Gold Beach Hospital Auxiliary, and Gold Beach Rotary Club. TV enjoyed working with his hands. He built their family home in Vale and completed a large addition to their home in Gold Beach. He also enjoyed hunting, fishing gardening and being outdoors.

Surviving family members include his wife of 68 years, Marilyn Skinner; his two brothers, Darrell (Ruth) Skinner and Don (Nona) Skinner; his children Terry (Cindy) Skinner, Randy (Betty) Skinner, Tammy (Richard) Weich, and Liana (Ron) Frunk; his twelve grandchildren Jeremy, Kori, Jared, Meagan, Kevin, Audra, Marlaina, Kelsy, Justin, Quinn, Allison, and Jasmine; and his fifteen great grandchildren: Damian, Ethan, Dresden, Zaiden, Nadine, Jackson, Caleb, Nora, Trinity, Briseis, James, Max, Eleanor, Jack, Alarec, and has two more arriving soon.
A great legacy to a life well lived.
THAT MAN IS A SUCCESS
who has lived well, laughed often and loved much;
who has gained the respect of intelligent men and the love of Children;
who has filled his niche and accomplished his task;
who leaves the world better than he found it and looked for the best in others.

TV cared about people and encouraged them to seek out God’s purpose in their lives and pattern their lives after Christ so they would be able to enjoy the blessings of this life and spend eternity with God the Father.