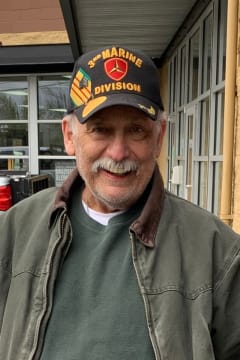 Longtime Beavercreek resident, Glenn Byhre, passed away at a Portland area hospital on Tuesday, September 6, 2022 at the age of 75. Friends and family will gather for a memorial service with military honors at Willamette National Cemetery on Friday, October 7th at 1:45 pm.
Glenn Carter Byhre was born June 19, 1947 in Portland, Oregon to John and Doris (Allert) Byhre. He was raised in the Portland/Gresham area where he graduated from Centennial High School. Glenn entered into the US Marine Corps in 1966, serving in Vietnam and was honorably discharged as a Corporal in 1968.
Glenn ran long distance track for Bill Bowerman, the Oregon Track Club, Nike and the Marine Corps.
Glenn was married to Carol Byhre and they made their home in Beavercreek. Together they owned and operated retail stores at different times in Estacada and Molalla. They owned a small farm with cows, rabbits, chickens and pet dogs and cats.
Glenn enjoyed his cattle farm and could often be found wearing one of his many Marine Corps hats.
Survivors include his brothers Eric and John Byhre, sisters Mary Rispler, Joanne Anderson, Martha McKay and Debbie Byhre. He is also survived by his step-daughter, Karen Cusic; step-son, David Schmidt; 10 grandchildren; and 17 great-grandchildren. He was preceded in death by his wife Carol and step-daughter, Kathy Hartley.