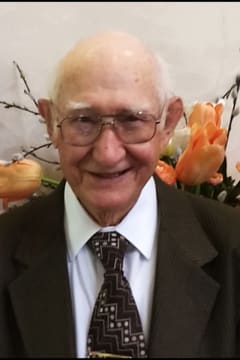 JACK FRED PUGH
According to his mother, it was a beautiful sunny November day when Jack Fred Pugh entered this world. He died at the age of 98 on May 31, 2022. It was a gorgeous summery day.
A graveside service in his honor will be held at 11 am on June 15, 2022 at Willamette National Cemetery, 11800 SE Mt Scott Blvd, Happy Valley, OR 97086.
Jack's parents were Fred (Pugh) Melburn and Dora Pulley. He was also predeceased by all of his siblings, Marjorie, Gerald and Allen.
Jack is survived by the love of his life, Pauline, who was his wife for nearly 75 years. His longevity could be partially attributed to her devoted care through the years. He is survived by two sisters-in-law, Beatrice and Barbara. Jack and Pauline raised four daughters; Jennifer (John), Jeanne (Bill), JoAnne (Ken) and Judy. His daughter, Jeanne, and son-in-law, Ken, predeceased him. He was blessed with 10 grandchildren: Chrisse, Linda, Billy, Becky, Johnny, Jack, Joy, Jenny, James and Jeremy. He has 19 great-grandchildren and many nieces and nephews who were all special to their "Uncle Jack".
Jack grew up in the Portland area, also living in Warrenton and Prescott, Oregon. He spent summers in Redmond, Oregon. He graduated from Benson High School before joining the Army during WW II. He was stationed in the South Pacific, Japan and the Philippines where he worked as a truck driver building air strips. Jack and Pauline were married in 1947 and lived in North Portland until moving to Beaverton in 1977. Jack and his family attended Central Bible Church in NE Portland for many years. He was a leader in his Sunday School class. He also served by driving a bus to bring children to church. After their move to the west side, they attended Allen Blvd Baptist Church and Southwest Bible Church. Jack worked for Safeway for 38 years before retiring in 1985. He learned an ethic of hard work from his mother. Even in retirement he had a list of what he expected to accomplish each day. When he retired, he went to his new full-time "job" of fishing for salmon on the Columbia, Willamette and Nestucca rivers. In earlier years, he had learned to enjoy fishing with Pauline's dad, Pete, and her brother Frank. In later years, a new fishing buddy, Paul, was a good friend to him. Jack knew how to strike up a conversation wherever he went and was known for his quick wit and his smile. His most popular topics of conversation were his Christian faith, how proud he was of his wife, Pauline, how much he loved his family, and, of course, many fish stories. Some of Jack's hobbies were woodworking, gardening, family vacations, camping and playing Shanghai, his favorite card game. In his 70's, Jack took up the discipline of walking several miles a day. He was still walking up to a mile just a few months ago. He met many neighbors who became his and Pauline's friends and have been a great blessing to them. He had an unequivocal testimony that he wanted to honor Jesus Christ in whom he trusted for his eternal salvation. One of his favorite Bible verses was John 3:16: "For God so loved the world that he gave his only begotten son, that whoever believes in him should not perish but have everlasting life."