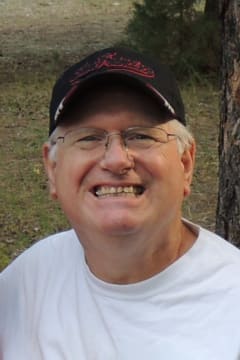 Beaverton resident, John Woodward, died on August 19, 2022 in Salem, Oregon.
He was 70 years old. A graveside service with military honors will be held on Monday,
August 29, 2022 at the Cascade Locks City Cemetery at 10:30 am.
John Gregory Wooodward was born in Hillsboro, Oregon to Kenneth and Naida Woodward. He lived in
Tualatin, Oregon. Around age 2, he moved with his family to Bridgeport, Washington where his dad
worked on the Chief Joseph Dam. They moved to The Dalles his senior year of high school.
After high school, he entered the US Navy, serving on the USS Hancock and other ships until being
honorably discharged in 1975.
He graduated from Mount Hood Community College and worked in welding and fabrication for most of
his career. He was a member of Sheet Metal Local 16. At the age of 52, he started and completed a five-
year apprenticeship to become a journeyman Sheet Metal Worker.
In August, 1982, John married Jennifer Pugh in Beaverton, Oregon. Together, they raised three sons and
a daughter. His family was the focus of his life and his greatest accomplishment was being a father to
them.
John had the privilege of learning many practical skills from his grandparents and parents. He especially
enjoyed everything to do with vehicles and mechanics. He had a keen mind to diagnose and solve
problems.
His favorite activity was hunting with extended family in eastern Oregon in the fall. He also enjoyed
fishing, other outdoor activities, and was an avid reader.
John became a Christian in 1977, thanks to the testimony of good friends. He freely gave of himself to
serve others. In his final time of illness, he showed extraordinary patience and strength of character.
Survivors include his wife of 40 years, Jennifer Woodward, Daughter Joy (Orion) Seaver Woodward;
Sons, Jack(Nhi) Woodward, James Woodward, Jeremy (Katelyn) Woodward; grandchildren, Jake, Juliana,
Zack and Emmit John; brothers Gordon (Carol) Woodward, Jeff Woodward, and sister, Sara (Matthew)
Heverly Woodward. He is also survived by much-loved nieces, nephews and cousins. He was preceded in
death by his brother and sister-in-law Glenn (Judi) Woodward.