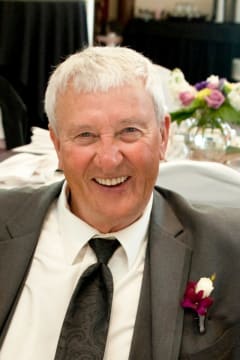 Ovean “Pete” LaRue. Longtime resident of Estacada. He was born in Steele, Missouri in 1937 to Verna (Dodd) and Ovean LaRue, Sr. Shortly after his father’s death, his mother, step father and sister moved to Oregon. They settled and bought property in Estacada shortly after the war. Pete enlisted in the US Navy in September 1955. During his service he worked on the aircraft carriers USS Enterprise and USS Yorktown. He ended his naval carrier as a recruiter in Oregon City with the rank of senior chief petty officer. After his retirement from the Navy he started long-haul truck driving, which he enjoyed for over 30+ years. In his retirement he enjoyed going on long trips on his motorcycle with friends. He was a licensed pilot. He was an avid outdoorsman. He was a skilled woodworker, cook and gardener. He liked nothing better than to sit around with his friends, having coffee and telling tales. He was preceded in death by his beloved wife of 28 years, Tonya Kay. He leaves behind three of his siblings, his 4 children and many grandchildren and great-grandchildren.

Pete was always ready for a ride, year round. His smile was contagious and it was always a pleasure riding with him. He will be greatly missed by many of his friends in the "Old Coots on Scoots" motorcycle group. Gene (& Gail) Sawyer President Old Coots on Scoots, Estacada Cascade Chapter #6
- Gene Sawyer

I was a barista at Barbara's Flowers and Coffee for years and Pete was one of my favorites. He was always so kind and had the greatest smile. I'm grateful I've had the blessing of knowing him. Rest in peace, Pete. With love, Lily Huffman
- Lily

We really enjoyed Pete's company on many rides with "Old Coots on Scoots". He always had a smile and kind word for everyone. We appreciated his stories and wisdom. It was an honor to ride alongside him down the highway. Pete will always be in our hearts. Mary & Doug Taylor
- Mary & Doug Taylor

I didn't know Pete very well, but his smile and kind words always made every ride with the Coots the happier one. Patricia Gayle (A J's riding partner) Many blessings to all the family. 🙏🏻🌼🏍
- Patricia Gayle

May you Rest In Peace Pete. Enjoyed the talks and rides we shared. You will be missed. A. J.
- Adam Kessler