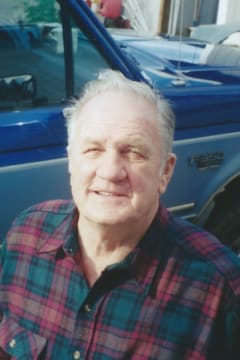 Longtime Estacada resident, Robert Jensen, died Sunday, January 2, 2022 in Sandy, Oregon. He was 94 years old.
Robert Lee Jensen was born May 16, 1927 in La Grande, Oregon to Martin and Christina (Westenskow) Jensen. He was raised in Elgin. In 1946, he entered into the US Navy. On March 25, 1948, he married Mary Shiel on the Naval Station in Pensacola, Florida. They moved to Hermiston, Oregon when he was honorably discharged in 1948. They started their family there. Robert worked as a truck driver for most of his working career. The family moved from Hermiston to Portland and then in 1976, they moved to Estacada where he and Mary spent the remainder of their days. Mary died in 2010.
Robert enjoyed camping, traveling in their RV, fishing and working on the family’s land to garden, raise livestock and spend time with his family. His greatest joy was working on his farm.
Survivors include his daughters, Doris Hodgen, Christy Jensen; 3 grandchildren and 5 great grandchildren. He is preceded in death by his wife, Mary; and his sons, Robert Lee Jensen, Jr. and Michael Lee Jensen.